The particulate filter consists of a porous ceramic (silicon carbide). It has a honeycomb-like structure with a large number of channels that are alternately closed at their ends so that the exhaust gas flow is forced to pass through the fine pores of the filter walls. The gaseous substances can pass through without any problems, whereby the much larger soot particles and other solids are retained on the partition walls and deposit on the wall surfaces.

The DPF system is equipped with a measuring device to record the exhaust back pressure. The exhaust gas pressure is measured before and after the filter.

The soot and ash load of the filter is determined from the differential pressure.

The DPF system is permanently monitored by the engine management system. At regular intervals and depending on various parameters such as differential pressure, distance travelled, time and temperature, an automatic cleaning process is initiated by the engine control unit. This is called:

The filter regeneration is automatically triggered by the engine control unit after a driving distance between 300 and 1000 km. Depending on the manufacturer, the exhaust gas temperature is temporarily increased by either additional fuel or additive injection to such an extent that the soot accumulated in the filter burns to ash and the exhaust back pressure drops again. Under normal operating conditions and when the engine is functioning properly, the driver usually does not notice the effort that has been made to treat the harmful exhaust gases.

If the ash/soot load limit is exceeded and active regeneration is not possible, a warning light or a text message on the instrument panel indicates that the filter is blocked.

In the best case, the engine control unit goes into emergency mode and reduces engine power to prevent consequential damage and reduce exhaust emissions. But a clogged diesel particulate filter can also cause serious damage. The exhaust gases cannot flow freely, which leads to greatly reduced engine performance with excessive fuel consumption. The engine temperature rises. The engine oil becomes thinner and has negative effects on lubrication and cooling. There is an acute danger of engine and turbocharger damage!


Causes of clogged particulate filters are usually assigned to one of the 3 following groups: 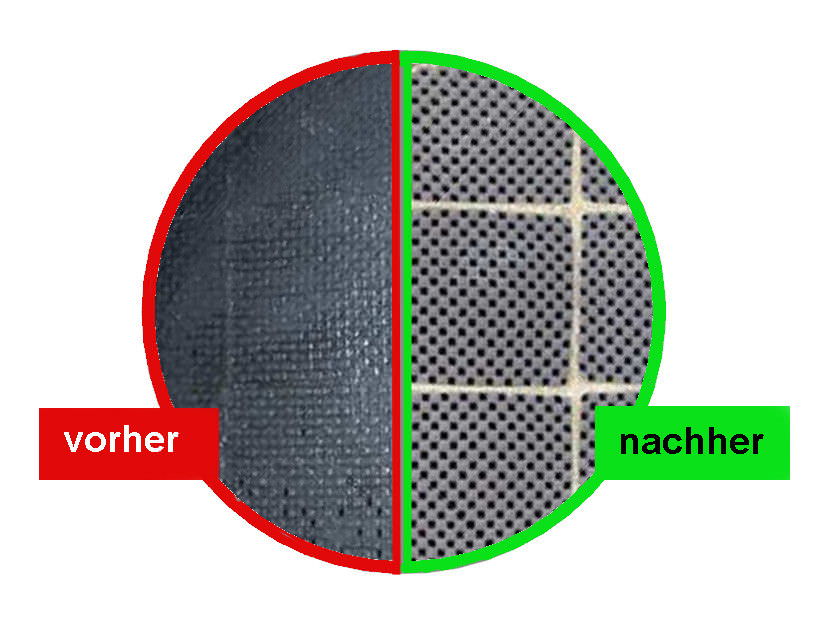 If the vehicle is mainly used for short distances, the diesel particulate filter can become clogged after only 200 km. In this case, the "active regeneration" triggered by the engine control unit is not possible because the exhaust gas temperatures are too low. This can possibly be remedied by driving for a longer period of time on open roads, during which an exhaust gas temperature of at least 500°C is reached. Occasionally this procedure is also described in more detail in the vehicle manual.

Alternatively, the workshop can carry out a static regeneration via the diagnostic connector, i.e. a free-burning program is started in which the engine is operated for several minutes at a speed of 4000 rpm.

2. excessive sooting of the engine

An engine that is not working properly can cause premature clogging of the particulate filter due to excessive soot formation and unburnt oil residues in the exhaust gas.
The proper functioning of the engine control unit and its sensors, the turbocharger, the exhaust gas recirculation valve (EGR) and the differential pressure sensor must be checked. In this respect, it is recommended that a car repair shop be consulted.

Depending on the vehicle manufacturer, its capacity or load limit is exhausted after 120,000 to 180,000 km. This means that at this point at the latest, the filter must be replaced on the manufacturer's recommendation. The costs for a new filter amount to approx. 1,000 to 2,000 euros. That does not have to be! Cleaning can help.

1. with additive
The additive system is used at Peugeot/Citroen (PSA group), but also in model series of Ford, Mazda, Volvo, BMW Mini. A certain amount of additive is added to the diesel fuel from a separate container. Adding the additive reduces the required soot-burning temperature from 550 °C to 450 °C, which can already be reached during normal driving.

If these instructions are not followed, a strong accumulation of soot will lead to increased temperatures and oil dilution, which can lead to engine damage.

2. without additive
German diesel engine manufacturers prefer the variant without additive. The burn-up temperature required for the filter is temporarily achieved by postponing the injection timing and additional post-injection of diesel fuel.

From a physical point of view, the efficiency of the engine is thus temporarily reduced, which is reflected in increased fuel consumption. The increased loss energy is fed to the filter in the form of heat and rising exhaust gas temperature.

With each regeneration or increasing mileage, the ash content of the filter, whose capacity is limited, also increases. For this reason, the filter must also be changed or cleaned every 120,000 to 180,000 km.

Often an oxidation catalyst is installed upstream of the DPF. It converts the nitrogen oxides contained in the exhaust gas into NO2. NO2 is a very active oxidant, which burns soot at temperatures as low as 250-350°C.